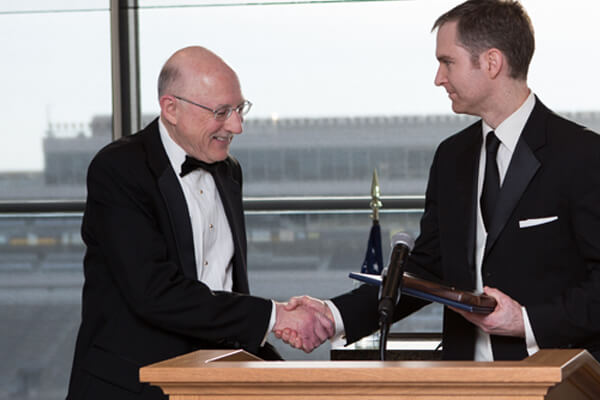 On the Awarding of the Notre Dame International Security Center’s Lifetime Achievement Award to Barry R. Posen, Ford International Professor of Political Science and Director of the Security Studies Program at the Massachusetts Institute of Technology, April 11, 2019

In 2015, the Notre Dame International Security Program (NDISP) became a center as a result of a major grant from the Charles Koch Foundation to promote innovative approaches to the study of grand strategy.  In making this grant, CKF had identified a need to broaden and deepen the study of grand strategy – in our awardee’s words “a political-military means-ends chain, a state’s theory about how it can best ‘cause’ security for itself” – due to the widely shared view that the debate about post-Cold War U.S. grand strategy had become unduly narrow[1].

Therefore, on the tenth anniversary of the establishment of NDISP, and in celebration of its elevation to center-status as the Notre Dame International Security Center, the faculty, fellows, and students of NDISC are pleased to honor Barry Posen with this life-time achievement award for innovative approaches to the study of grand strategy.

A full recounting of Professor Posen’s contributions would necessitate a recitation of almost his entire curriculum vitae.  But in the interest of brevity, we highlight three particularly important elements of it.  First, Posen’s Woodrow Wilson Foundation and Edgar Furniss National Security Book Award-winning The Sources of Military Doctrine helped put the study of grand strategy back on the agenda of Cold War international Security Studies.  It provided the now canonical definition of the term and made  the study of the interrelationship between political objectives and military means a major part of the scholarly debate.

Second, his co-authored 1996 International Security article with Andrew Ross, “Competing Visions for U.S. Grand Strategy,” laid out the full range of grand strategic options for the post-Cold War United States and explored not only the theoretical logic undergirding each of them but also highlighted the optimal force posture each would require.[2]  This article has become the go-to source for much of the subsequent scholarship on post-Cold war U.S. grand strategy.

Finally, with his 2014 book Restraint, Posen planted his intellectual flag on behalf of a major grand strategic departure for the United States.  In this sharply argued and comprehensive volume, he shows why the grand strategy of “deep engagement,” which has guided America’s military strategy for the past twenty years, is neither economically sustainable nor militarily necessary.  More importantly, he argues convincingly that an alternative approach – Restraint – will provide a sounder basis for ensuring U.S. national security in the years to come.[3]

In addition to his scholarly achievements in broadening and deepening the study of grand strategy, no complete account of Posen’s contributions in this area could omit mention of his leadership over the years of the MIT Security Studies Program, Seminar XXI, and the training of many younger scholars who have themselves gone on to contribute to the innovative study and practice of grand strategy.

We are therefore pleased to present Professor Barry R. Posen with this life-time achievement award for innovative approaches to the study of grand strategy on the tenth anniversary of the Notre Dame International Security Center.