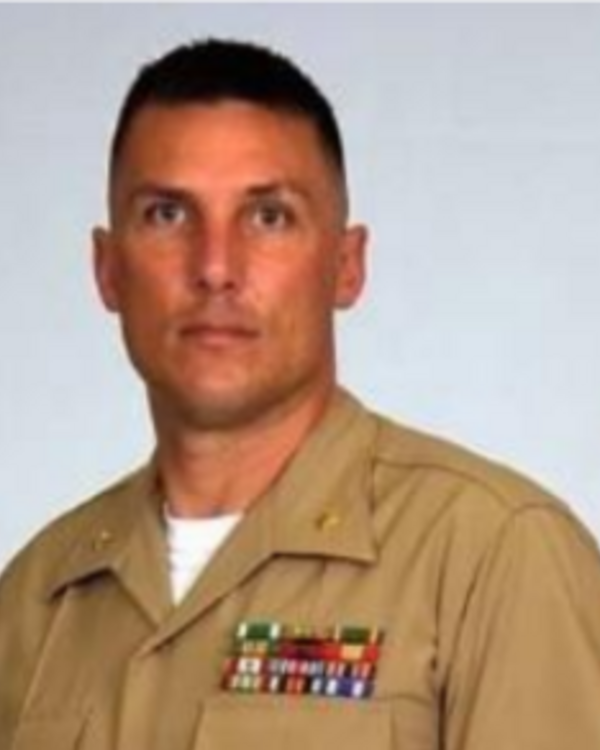 Major Lee R. Jones was born in California and graduated from Tulare Union High School in Tulare, California in 2000. He enlisted in the United States Marine Corps in May 2002. During Major Jones’ enlisted tenure, he served in the Military Occupational Specialty of 6484, Electronic Systems Countermeasures Intermediate Repair for the EA-6B Prowler at Marine Aviation Logistics Squadron (MALS-14), Marine Corps Air Station (MCAS) Cherry Point, North Carolina from 2003 – 2008. In 2008, Sergeant Jones transferred to Naval Air Station Whidbey Island where he served in his MOS alongside his Navy counterparts. In January 2010, after completion of his bachelor degree, Staff Sergeant Jones was selected for the Enlisted Commissioning Program and attended Officers Candidate School in January 2010. Commissioned a Second Lieutenant in the United States Marine Corps in March 2010, he was assigned to Delta Company at The Basic School and graduated in October 2010. After completing follow-on schooling, Second Lieutenant Jones was designated a 6002 Aircraft Maintenance Officer and reported to Marine Tactical Electronic Warfare Squadron Two (VMAQ-2), MCAS Cherry Point Cherry Point, North Carolina, and served as the Maintenance Material Control Officer (MMCO) and deployed with the squadron in support of Operation Enduring Freedom at Bagram Air Base, Afghanistan. In January 2013, First Lieutenant Jones transferred to VMAQ-1 where he served as the MMCO and the Assistant Aircraft Maintenance Officer (AAMO) while assisting in the transition for the squadron to become the EA-6B Prowler training squadron VMAQT-1. During Captain Jones’ time in VMAQT-1 he was able to participate and complete the first Expeditionary Blended Seminar Program. In January 2015 Captain Jones transferred to MALS-14 to serve as the AAMO. In June 2015, Capt Jones transferred to MALS-16, MCAS Miramar, California where he served as the Quality Assurance Officer simultaneously leading the process improvement effort as the AIRSpeed Officer in Charge where he received his Department of the Navy Lean, Six Sigma Black Belt. In January 2017 Captain Jones assumed the role as the AAMO for MALS-16 where he coordinated the production effort of the CH-53 RESET project and the validation/verification of RESET at Erickson Incorporated. In August of 2018, Captain Jones transferred to Marine Corps Embassy Security Group (MCESG) Region 7 (North and West Africa) in Frankfurt, Germany. During this time Captain Jones was promoted to his current rank of Major and served as an Inspecting Officer, Logistics Officer, and Executive Officer ensuring the readiness and operational capabilities of 20 United States Embassies and Consulates located throughout 19 different countries in North and West Africa. Major Jones’s personal awards include the Navy and Marine Corps Commendation Medal and the Navy and Marine Corps Achievement Medal with three gold stars. Major Jones holds a Master of Science degree from the University of Wisconsin in Project Management and his Bachelors of Science from Southern Illinois University in Electronic Systems Technologies.