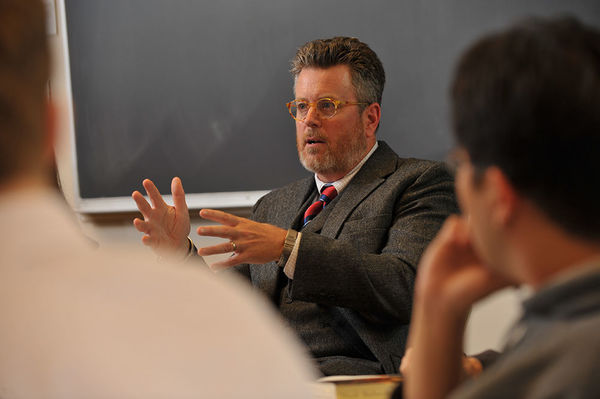 NDISC Faculty are at the forefront of thought leadership in national security. Their research drives change and impacts policy, which is brought to the classroom and to conversations within the center.

The latest knowledge in the field, as well as the skills and passions as active researchers, are shared with students on a daily basis.

Our faculty teach students to become researchers in their own right, helping them develop as lifelong learners and go on to a myriad of interesting and engaging careers.

The United States of America was founded on a conspiracy theory. In the lead-up to the War of Independence, revolutionaries argued that a tax on tea or stamps is not just a tax, but the opening gambit in a sinister plot of oppression. The signers of the Declaration of Independence were convinced — based on "a long train of abuses and usurpations" — that the king of Great Britain was conspiring to establish "an absolute Tyranny" over the colonies.
This year is the 20th anniversary of the Women, Peace, and Security agenda. Not nearly at its midpoint, 2020 has already been a year of significant disruption. Amid a global pandemic, recession, and anti-racism protests, the security ideals upon which nations have been built are in flux. Nations are faced with systems that no longer serve...
Scholars have often dismissed the effect of war on state formation in regions like Latin America, where mobilization for war is deemed insufficiently intense and international conflict fails to out‐select weaker states. Against this conventional wisdom, I contend that wars can affect state‐building trajectories in a postwar period through the different state institutions that result from...
Conventional wisdom suggests that when women attain high political office they are more likely to act as peacemakers than their male counterparts. In contrast, this article argues that...
Black Gold and Blackmail seeks to explain why great powers adopt such different strategies to protect their oil access from politically motivated disruptions.
Political economy infuses the process that generates military power, notably including..
US strategy in East Asia is defensive—seeking to maintain the territorial status quo and to preserve open trade and investment. The military component of that strategy largely involves helping allies defend their territories against China as the PRC grows richer and spends more on its military. But current US military operational plans in service of that strategy are largely offensive: in case of war, they would send US military assets close to China and launch conventional strikes against the Chinese homeland. This “offensive defense” is more expensive, more dangerous, and less effective than an alternative: “defensive defense.”
Studies identify cost as a key factor determining the effectiveness of economic sanctions. We argue that failing to account for market dynamics in the sector in which sanctions are imposed undermines the validity of estimates of the economic costs imposed on target countries, and we propose that market structure powerfully conditions sanctions effectiveness. To examine the effect of market structure, we trace the causal path through...
Why would countries without nuclear weapons even think about fighting nuclear-armed opponents? A simple answer is that no one believes nuclear weapons will be used. But that answer fails to consider why nonnuclear state leaders would believe that in the first place. In this superb unpacking of the dynamics of conflict under conditions of nuclear monopoly, Paul C. Avey argues that the costs and benefits of using nuclear weapons create openings that weak nonnuclear actors can exploit.
How professionalization and scholarly “rigor” made social scientists increasingly irrelevant to US national security policy To mobilize America’s intellectual resources to meet the security challenges of the post–9/11 world, US Secretary of Defense Robert M. Gates observed that “we must again embrace eggheads and ideas.” But the gap between national security policymakers and international relations scholars has become a chasm.…